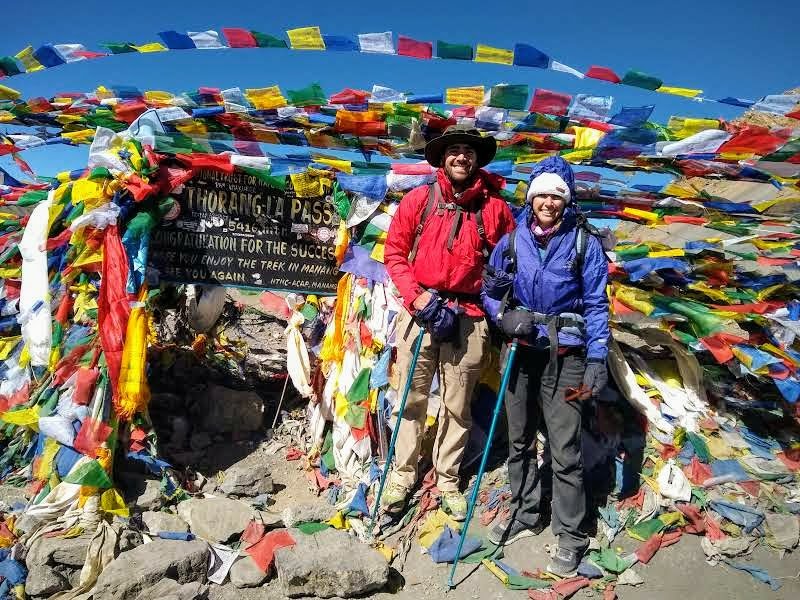 I wish I could title this Summiting Thorung La, but we technically aren’t summiting anything. Thorung La is 17,670 feet high, and is a saddle between mountains that are 21,000 feet tall. That is much too high for me.

Today was brutal. The air is so thin and cold that every breath feels like an asthmatic wheeze. We had a five mile hike and ascended from 4020 meters to 4430 meters. To make matters worse, we were racing all the other hikers up the mountain too. This wasn’t an arbitrary race caused by my over-competitive nature, even though every other day I have been secretly racing (and beating) everyone too. Today the stakes were real. There would only be forty rooms at camp when the previous camps all had at least one hundred. We needed to get there quickly, but I could barely breathe. I pushed through the pain –and we did get a room– but I did not recover well. 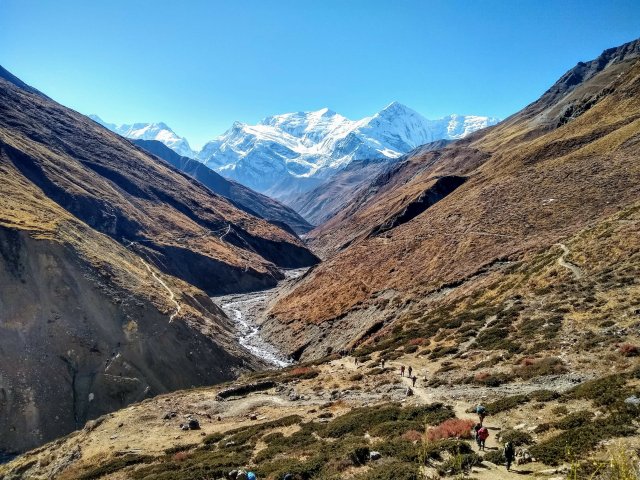 We napped on arrival then sat in a sunbeam until the sun disappeared behind the mountains at 3pm. The temperature dropped drastically reaching a low of 19F. The common area had a fireplace, but the small fire only lasted an hour before the wood was consumed and the room returned to frigid. That night I wore every layer I had to bed. I even put plastic bags around my socks to trap in more warmth.

On a brighter note, the stars at night were amazing! The moon wasn’t out and the sky had been cloudless for a week. We could see the milky way and a million other stars. Never in my life had I seen the night sky look so brilliant.

After a sleepless night of nausea and stomach cramps, it was time for our final climb. At least we could take our time today and tonight we will be sleeping lower.

It did not start well. I could barely propel my body forward and every step was a battle. My muscles wouldn’t activate, or perhaps this was all the power I had left. It took an hour to climb the first kilometer that gained us 430 meters of altitude (43% grade). I was nauseous and weak, and starting to panic about dying of altitude sickness. If not AMS, I was sure my glacial pace would keep us on the trail for far too long and expose us to the fierce afternoon windstorms. Knowing I still had 600 more meters to climb in ever-thinning air, something had to change. 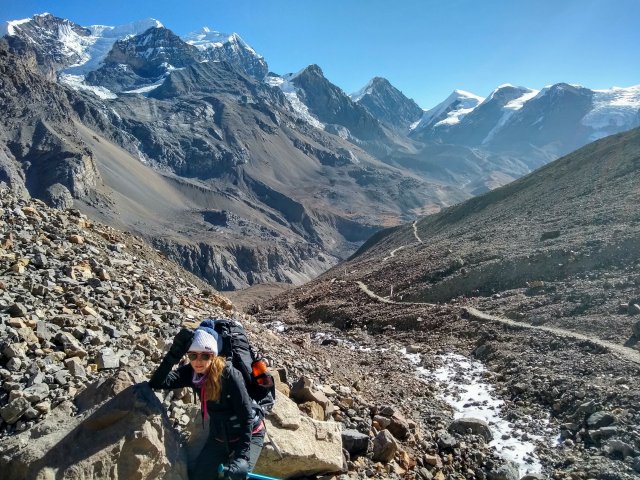 I spotted a man with a pony and I hired him on the spot to take me to the top of the pass. Aaron was feeling strong and he nearly kept pace with the pony! He had been patient with me as I struggled up the first section, but it was incredible to watch him power along at his own pace. He arrived just a few minutes after me. It was good that he wasn’t too close though, because that was the gassiest horse I have ever met. I guess the altitude affects them too! 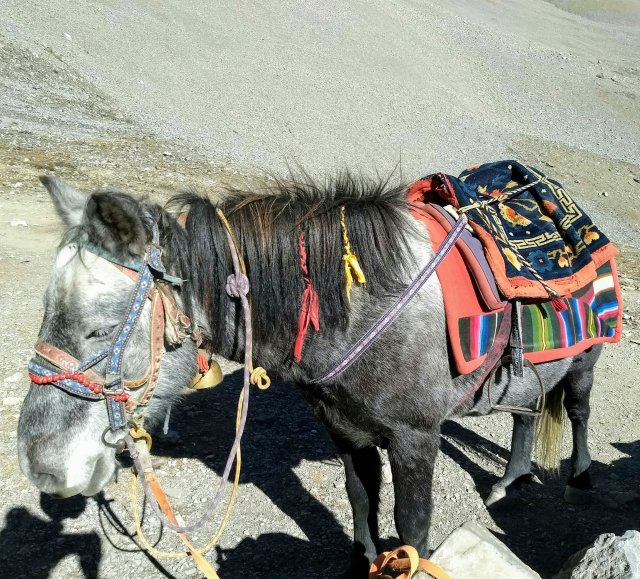 I dismounted at the summit and breathed a prayer of thanks and a sigh of relief that it was downhill from here. Thorung La is 5,416 meters/ 17,768 feet. For comparison, Mount Whitney is 14,508 ft, Mt McKinley/Denali is 20,310 ft and Mt Kilimanjaro is 19,340 ft. Putting on an extra jacket winded me at this elevation. 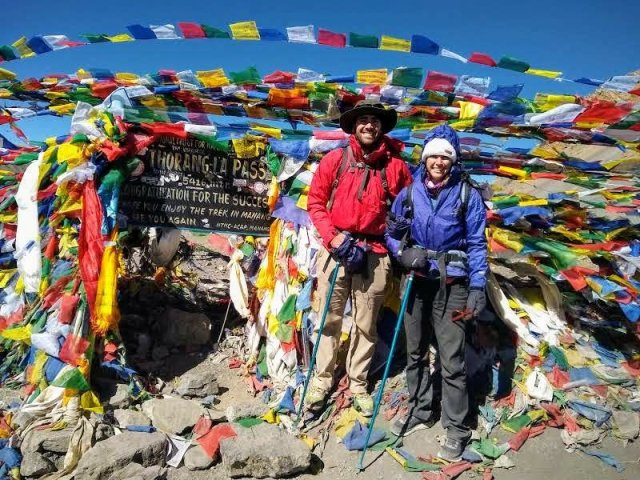 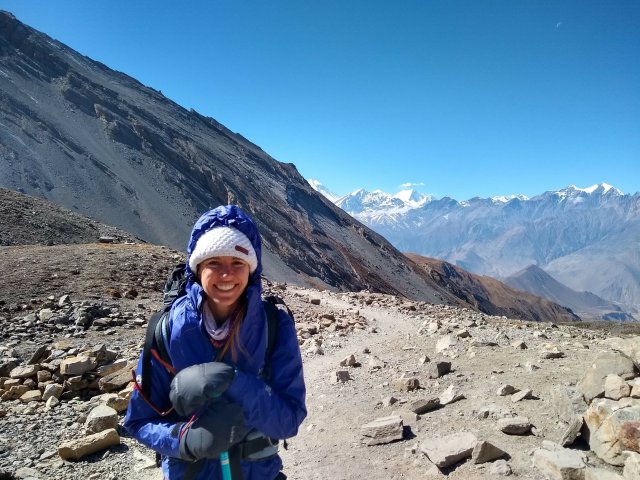 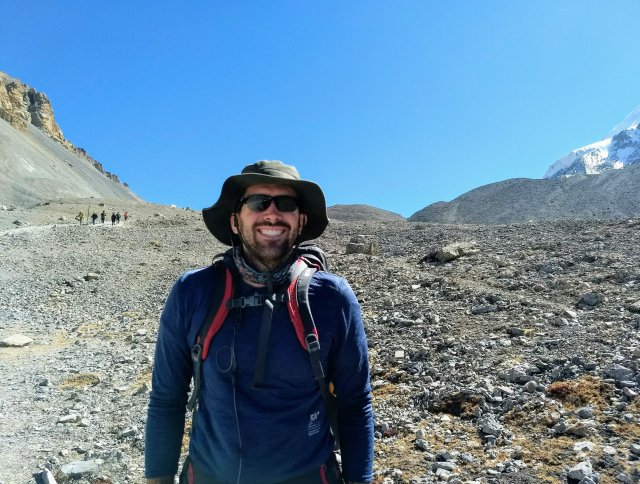 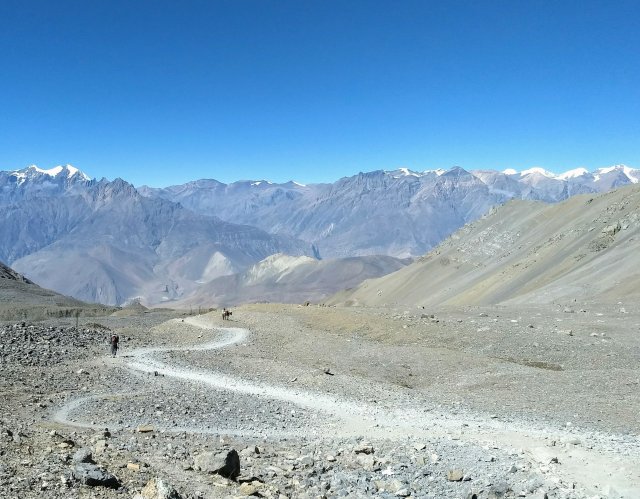 Downhill has always been easy for me. It is like balancing with loose hips while gravity tugs me along. We had ten kilometers to go and 1,700 meters to descend. We did pretty well, but my stomach got worse and worse. At least altitude sickness is no longer the fear, but when I am this sick it is only a small consolation. We found a room with a Western toilet that promised hot showers. Aaron went first, and his shower was 11C (52F). I was hot with fever, so I was able to hold him and warm him up for short intervals between sprints to the bathroom. This may have been the worst day of the entire trip.

6 thoughts on “Crossing Thorung La, Days 9-10 of the Annapurna circuit”